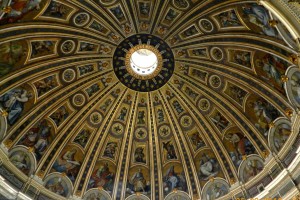 We often hear that we have been called; called to serve, called to witness our faith, and called to be holy.  For many that call goes unheard, unanswered, or even ignored.

God does not call us where we cannot go.  He calls us right where we are, asking us to draw upon our own unique God-given talents.  Look at Peter, James, and John, three of Jesus beloved disciples.  By nature and trade they were fishermen.  They spent many long days and nights casting their nets.  We see in the Gospels that at times their bounty was plentiful and at other times not so much.

We also see in the Gospels that Jesus called them to leave their trade and come follow Him, promising to make them not just mere fishermen but fishers of men.  Peter, James, and John immediately answered His call and through them many were Saved who otherwise would not have been.  The legacy of Peter, James, and John still continues over two-thousand years later.  Because they answered His call and used their talents for only His greater glory, their reward was beyond measure.

Jesus does the same with us today.  He calls us to use the talents we already have.  This does not mean we must leave our trade, our profession, and go to foreign lands.  Not all are called in that way.  It does mean, however, that we have already been given the necessary tools, skills, and traits to take up His call.

There are many paths on which to follow Jesus.  It may actually be through the tools of our trade, or it may be some other talent we have been endowed with.  It may even be an intense urging within that never seems to cease.  What are the things in your life you are really good at?  Seek out ways to use them to follow Jesus and like Peter, James, and John you will find yourself leading others to Him.  You will find yourself helping to save souls.  The rewards are great for those who devote themselves to Jesus and those He longs to save, those He loves.

Using my own story as an example, I write for God.  I feel I have been called to do so.  I believe in my heart and soul that He hired me.  For much of my life I have felt the urge to write.  Over the years I have submitted for publishing some of the things I have written.  I never seemed to hit the right mark at the right time.  While raising my family and working, I found I did not have the time necessary to pursue it, so I eventually set it aside.  One day I began prayer journaling.  It fulfilled my desire to write, and as a result I have many years of volumes of answered prayers.  Then, one day I entered into The Stillness and felt a strong desire to write down everything that happened while I sat before God.  My reward has been beyond measure.  My journey has been one of great learning and fought for humility.  He has filled me to the brim and it has all come spilling out in my prayer journals and my “Journey Through The Stillness”.  Yes, I had always been drawn to writing, but it wasn’t until I took a longing and merged it with a talent given me by Him that I was able to do so.  Until I wrote for Him, I couldn’t make it happen on my own.

Every single one of us has something about us that is uniquely ours.  He calls upon each of us to use our own uniqueness for His greater glory.  When we do so we become exactly who He wants us to be, who He created us to be.  We become a reflection of Him.

Ask Him to show you who you truly are and give in to His call.  Your reward will surely be beyond measure.

See 'About Me' page at http://www.marthasorbit.com
View all posts by Martha →
This entry was posted in Faith, Habits, Inspiration, Journaling and tagged and John, called, James, Jesus, Peter, reward, write. Bookmark the permalink.

2 Responses to Reward Beyond Measure