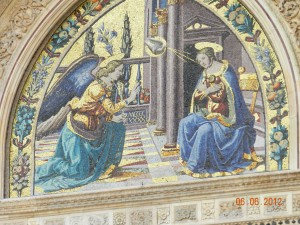 “The LORD said to Moses: ‘Bring me seventy of Israel’s elders who are known to you as leaders and officials among the people.  Have them come to the tent of meeting, that they may stand there with you.  I will come down and speak with you there, and I will take some of the power of the Spirit that is on you and put it on them.  They will share the burden of the people with you so that you will not have to carry it alone.’ … So Moses went out and told the people what the LORD had said.  He brought together seventy of their elders and had them stand around the tent.  Then the LORD came down in the cloud and spoke with him, and he took some of the power of the Spirit that was on him and put it on the seventy elders.  When the Spirit rested on them, they prophesied–but did not do so again.  However, two men, whose names were Eldad and Medad, had remained in the camp.  They were listed among the elders, but did not go out to the tent.  Yet the Spirit also rested on them, and they prophesied in the camp.”  Numbers 11:16-17,24-26

The Lord is relentless in His pursuit of us.  Even when we would thwart His plan, He finds us and fulfills His purpose.  Eldad and Medad are perfect examples.  Why didn’t they go out to the tent as told?  We will never know their reasons.  It could have been fear, doubt, rebellion, or even pure laziness.  It doesn’t matter.  What matters is the end result, which is that the Lord’s Spirit found them and rested on them.  With His Spirit upon them they fulfilled the Lord’s purpose for them.  They prophesied.

The following is an entry from Journey Through The Stillness, my personal spiritual journal.  It illustrates the point beautifully:

Jan 30, 2010 – Infusion… I meld into Him and He asks me to look through His eyes.  To see myself.  He TELLS me what I see … someone who is sorrowful, strives to do good, but who falls short because I hear, then doubt my ability to carry out His commands, then push it far back in my mind, but I still hear.  He wants me to see this, to understand He is frustrated with me, yet sees my good and will not stop speaking to and pushing me to do what HE AND I KNOW is mine to do.

When God seeks us, we can run but we can’t hide.  His pursuit of us is relentlentless and His love for us knows no bounds.  Listen for His voice and do not remain in camp when called.  Yet know, that if you miss hearing His voice, He will lovingly come and find you.  You just might find yourself prophesying!

See 'About Me' page at http://www.marthasorbit.com
View all posts by Martha →
This entry was posted in Biblical, Habits, Inspiration, Journaling and tagged Lord, pursuit, relentless, Spirit. Bookmark the permalink.