The Greatest Truth Ever Told 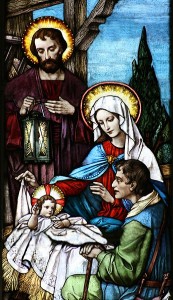 Merry Christmas to each of you.  May His Glory shine upon you and may you feel His Peace within the very depths of your soul.

Please take a few minutes to read and reflect on the greatest story ever told.  Only it isn’t a story it is Truth.  Immerse yourself in it; imagine yourself there.  Let it speak to your heart.  Let it touch your soul.  Let it be the focus of your Christmas.

“While they were in Bethlehem, the time came for Mary to have the baby, and she gave birth to her first son.  Because there was not rooms left in the inn, she wrapped the baby with pieces of cloth and laid him in a box where animals are fed.  That night, some shepherds were in the fields nearby watching their sheep.  Then an angel of the Lord stood before them.  The glory of the Lord was shining around them, and they became very frightened.  The angel said to them, “Do not be afraid.  I am bringing you good news that will be a great joy to all the people.  Today your Savior was born in the town of David.  He is Christ, the Lord.  This is how you will know him:  You will find a baby wrapped in pieces of cloth and lying in a feeding box.”  Then a very large group of angels from heaven joined the first angel, praising God and saying: “Give glory to God in heaven, and on earth let there be peace among the people who please God.”  When the angels left them and went back to heaven, the shepherds said to each other, “Let’s go to Bethlehem.  Let’s see this thing that has happened which the Lord has told us about.”

So the shepherds went quickly and found Mary and Joseph and the baby, who was lying in a feeding box.  When they had seen him, they told what the angels had said about this child.  Everyone was amazed at what the shepherds said to them.  But Mary treasured these things and continued to think about them.  Then the shepherds went back to their sheep, praising God and thanking him for everything they had seen and heard.  It had been just as the angel had told them.”  Luke 2:6-20

Again, Merry Christmas to each of you.  May His Glory shine upon you and may you feel His Peace within the very depths of your soul.

See 'About Me' page at http://www.marthasorbit.com
View all posts by Martha →
This entry was posted in Biblical, Christmas, Inspiration and tagged Heart, Mary, Peace. Bookmark the permalink.