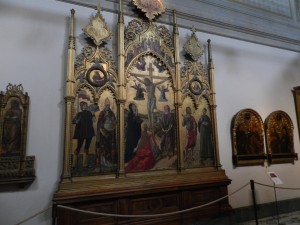 “So he asked them the hour when he began to mend, and they said to him, “Yesterday at the seventh hour the fever left him.”  The father knew that was the hour when Jesus had said to him, “Your son will live”; and he himself believed, and all his household. This was now the second sign that Jesus did when he had come from Judea to Galilee.”  (John 4:52-54)

The official whose son lay dying had faith enough to leave his side and the courage to seek the One who could heal him.  Because of his faith, Jesus healed the official’s son.  The official, however, had to wait before learning his son’s fate.  And, when he did, he knew without a doubt that Jesus had healed him.

In some families there is separation beyond miles, beyond faith.  It may not be as simple as believing and professing your faith as an example.  It may require the patience and sacrifice of the official.  He was willing to sacrifice being at the side of his dying son in order to secure his healing.  He was willing to leave all in the Hands of Jesus, without knowing for certain the outcome, and return to his son’s bedside to wait, if need be.  Because of his great faith and sacrifice, his willingness to trust and do as Jesus commanded, Jesus sent him an answer through his household servants before he reached home.  One can only imagine the praise and thankfulness, the joy in the official’s heart, once he received the news.

If you have loved ones who are separated from Jesus, it may not be possible to bridge the gap, except through prayer and fasting, through patience and sacrifice.  Lent is a time for renewing and enriching not only your own relationship with Jesus, but it is also a time for offering up prayers and sacrificing on behalf of others.   Afterwards, you must be willing to wait in trust and patience until the answer comes, but knowing that all is in the Hands of Jesus.  Praise and thank Him even before the answer comes.

See 'About Me' page at http://www.marthasorbit.com
View all posts by Martha →
This entry was posted in Biblical, Faith, Habits, Inspiration, Lent, Prayer and tagged faith, Hans, Jesus, official, Trust. Bookmark the permalink.