Mother Of The Word 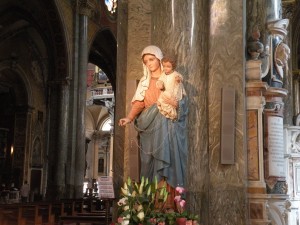 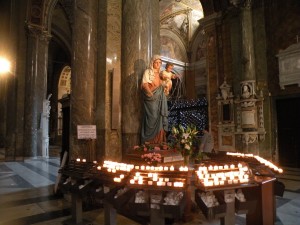 “And Mary said, Behold, the handmaid of the Lord; be it unto me according to thy word. And the angel departed from her.”  Luke 1:38

I have shared before that there are times when I have the tremendous urge to write something that I feel He is leading me to write.  Sometimes I simply write whatever it is, and then set it aside only to have it jump out at me at a later date.  This is one of those times.  For several days this particular prayer, written by me on May 28th, has presented itself.  First, on July 25th, as I wrote in my Stillness journal after a very disturbing encounter, when it fell out along with another prayer to Mary written by Pope John XXIII.  I looked back in my journal today and realized the day I wrote out this prayer, May 28th, there was no Stillness.  I can’t remember why I didn’t enter The Stillness that particular day, but I did so on the day before and the day after.  All I can say is that I probably wrote this prayer, feeling urged to do so, during my regular prayer routine.  For some reason I also penciled the date beside it.  Regardless, I now feel I am being urged to share it.  The timing is His…

Mother Of The Word

Mary, Mother of the Word Incarnate,

You adoringly cradled the holy child

who foreshadowed the piercing of your heart.

You knelt lovingly at the foot of the Cross

and witnessed Him die, the child of your womb.

You stood mournfully by His side as they lowered

His sacrificed body and you prayerfully grieved

while He lay in His tomb.

You greatly rejoiced at His miraculous Rising,

the child of your womb,

whose glorious return from the grave

endowed each and every soul with brand new Life.

Now, given us by Him as our own beloved mother,

may you do all for us as you did for Him,

the child of your womb.

See 'About Me' page at http://www.marthasorbit.com
View all posts by Martha →
This entry was posted in Faith, Habits, Prayer and tagged Child, Mary, womb, Word. Bookmark the permalink.